Do you know what is a database and the types of database models? You must know that in today’s world there is a lot of demand for data and information. Data and Information In a short time, you can get it just by searching on the Internet. All you have to do is to write your questions in the Mobile browser or in Google Search.

You will get answers to your questions immediately within a few seconds. Big company’s information of their Employees (Name, Salary, IDno, Address). Information about children studying in colleges and schools like Name, Roll no, Address, City, everything is present on the Internet nowadays. But few people know where it is present on the Internet. But you will get the answer soon.

Now as many Aadhar cards are being made in India, I mean almost crores of Adhar cards have been made. The information about all these is also on the Internet, is it not? Banks and Online reservations (Train, Flight, Hotel) also change a lot of data every day.

Transaction in the bank is done through computer and mobile. There is also data, but transactions also happen to millions of people. Now you have another question in your mind. Where are the details of all these transactions stored?

Sometimes you must have wondered where all this data and information resides. Is there any such place on the Internet? Or does a man sit down and write? The answer to all these is Database. Also, know that the Internet is nothing without a database. So let’s know today what is a database.

Organized means keeping the punishment as you keep the books on the table, in the same way, the information and data are kept in the database. To store information, some software is used, the best example is MS-Excel. Here all the data is kept in Digital Memory Devices like Hard disks.

Information is kept in the database in such a way that you can easily access and manipulate the data.

Let us understand with an example “An MS-Excel Sheet where you have the details of 100 students. In details like Roll NO, Name, Address, City Name, Father’s Name, Date of Birth. Here we and you can say that this Excel Sheet is a database.

DB means whatever information and data are in the DataBase, you can access it whenever you want. Now let’s understand what Access means. There is a university, where there are many students, about 5000 their exams are over.

Now their results are uploaded to the database through the computer, it may also be that the official website of the university is there. So it is uploaded there as well. Now it has become the database of Students Result.

When the result date comes, then this result is published. Only then do the students start looking for the result by entering their roll no. This process is called accessing the database.

There are many such databases such as Google’s, Company’s, and Government’s databases, where they store their information.

It is a software system, through which a user creates, defines, maintains, and controls the database. DBMS is a collection of programs and is generally used to maintain Database(DB).

Now let us understand the meaning of maintaining “In this, you can do all these things like Inserting Data in DB, Edit, Delete, Access and Update.

You already know what is Database Management System (DBMS) is. Let’s understand again, that DBMS is a software package. Through this software, you can create a database. Like you have created a database named Student, and now you have to add the details of the students to it.

If knowingly or unknowingly give wrong data, then you will have to edit the student details. After a few days you came to know that someone’s data is wrong, then you will also have to delete it. If you have to search its name and address from the roll no of a student, then it is called Access.

Now you must have understood what DBMS does. Take this example, you can put it in a company also, the same thing happens there too.

Well, there is a lot of DBMS software, some of them are

Out of all the DBMS, Dbase was first created. It was used in Microcomputers. This software was the most successful DBMS of its time. All these components reside in DBASE such as Database Engine, Query System, a forms engine, and a Programming Language is used to run all three. The extension of this file is .dbf.

A company named Ashton-Tate published Dbase in 1980, this DBMS was used to run in the microcomputer’s os. Later it was used by Apple-|| And it started happening in IBM PC too, both used to run on dos os. For many years, Dbase was also awarded Best Selling Software of the Year. When Dbase-||| When released, it started running in UNIX and VMS also.

Here along with a text-based procedurally oriented programming language, it is also a Database Management System. It is an Object Oriented Programming Language. For the first time, it was published by Fox Software.

But Microsoft further developed FoxPro to run in MS-DOS, Windows, and Unix versions. Right now its name is Visual FoxPro but after a few years, its production was stopped in 2007.

The hierarchical model is followed to store the data in the IMS database. Which is quite different from DB2 and Relational Model. Usually, this DBMS is used for Information Management.

Oracle is also called Oracle RDBMS. It is the object-relational database management system. It is used a lot in today’s time, the name of this software company is Oracle Corporation. Larry Ellison and his two friends were the co-founders of this corporation.

It is an object-relational database management system. It was named after the daughter of its co-founder Michael Widenius and SQL stands for Structured Query Language. The name of this DBMS Software Company is MySQL AB which was formed in 1995. Now it is owned by Oracle Corporation.

This is a product of a database. This is RDBMS means Relational Database Management System. DB2 is used to store, analyze and retrieve data in the database. db2 is also following the concept of Object Oriented.

All the operations given below are done on the database. Let us understand them in detail one by one.

If you store some data, then it is called Insert Operation. Like there is a student database where you insert data Name, Roll, Mark, City.

If you delete data or a record from the database, then this operation is called Delete Operation. You can also use some programming language to delete.

The information or data that already exists and you are making changes in it, then it is called Update. I will still take the same example if a student’s family has shifted to another place, then you have to change the address from the database, this is called Update.

Finding the same information or finding the group of information, is called a Search or Access Operation. Like checking any result, checking balance, checking whether a train ticket is available or not, all this is a search operation.

The data model tells you how the data is logically stored, organized, and manipulated in the database and what should be the logical structure of the database.

These three methods, these are a single data model. Similarly, these three models are used in Database Design.

It means just like the trees are there in the same way. This tree itself represents the logical structure of the database. Below is the structure of this model.

This model is very powerful and simple. It is very flexible and natural. The Structure Table of this Data Model would have been the same. The table is called relation in the language of the database. That is why its name is also Relational Model. It is like a Table, so it has Rows and Columns.

Also See: What is a Keyboard Read More

In the Relational Model, Rows are called Records, and Columns are called Fields. This model was proposed by E. F Codd when he was in IBM. In this model, the Unique Field is called Key. And through these keys, the tables are connected among themselves. A student table has Roll no, Primary key.

There are three main components

This is the user who accesses and searches the DB from anywhere. Just like you are a similar user, you do some search in Google, and you read after reading. But you do not have information about what is inside and how it is stored.

The full form of DBA is Database Administrator, it is called Manager. Which runs the whole system. It understands the needs of the user and manages and updates accordingly.

This is DBMS Software Program. It is used to manage the entire DB. Information about what is DBMS will be available if you look above. This was some information about the components.

What did you Learn Today?

It is my endeavor that you get complete information about this article database – What is Database in Hindi in one of my articles. Today you have learned what is a database system and what Database Model in Hindi. To explain it a little better, I have tried to explain it to you by taking some examples. 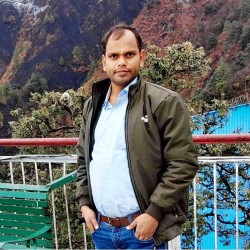 My Name is SUNIL KUMAR the Founder of Clickblog.Org. I am a Digital Marketing by profession but a Blogger by passion.